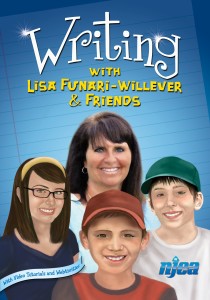 Before becoming an award-winning author, Lisa Funari-Willever was a fourth grade teacher. She remembers the challenges of teaching the art of writing and the writing process. She also remembers her greatest challenge: to assist students in developing a love of writing.

Today, educators face even greater obstacles with rigid, over-structured programs and endless standardized testing; neither of which is a recipe for creativity. In an effort to simplify the writing process, Lisa created Writing With Lisa Funari-Willever & Friends.
The program consists of:

To motivate students, she has invited the very popular and recognizable main characters from her Nicky Fifth chapter book series to assist. Together, Lisa, Nicky Fifth, T-Bone, and Wanda present the process of writing in small, manageable steps. While we all know the secret to great writing is to write often, that only occurs when students are confident and enjoy it. 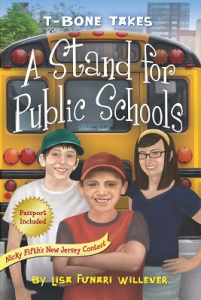 After reading about New Jersey’s Revolutionary Neighbors and their amazing contributions, T-Bone decided to become a Revolutionary Neighbor himself. When everyone reminds him that he’s a couple of centuries too late, he decided to do what they did and take a stand. The only problem is deciding what he will take a stand for. After some not-so-brilliant ideas, he decides to take a stand for public schools. Join T-Bone, Nicky, Wanda, and Timmy as they explore why public schools are so important and what really makes them successful. 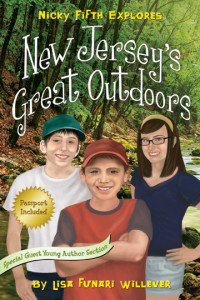 While Nicky Fifth and T-Bone eagerly await their new roles as New Jersey’s Official Junior Ambassadors, they discover a side of the state that most people take for granted– our amazing Great Outdoors. Despite Nicky’s reservations, they include Wanda Heiss, a new friend and T-Bone’s not-so-secret crush, on their Garden State adventures. Follow Nicky, T-Bone, and Wanda as they explore our state parks and forests while learning about the people who made them possible, including special guest, Governor Brendan Byrne.

When you’re a kid, you have your own odd-job business, and you’re about to be named New Jersey’s Official Junior Ambassador, what do you do for fun? If you’re T-Bone, you run for Student Council, of course! Follow Nicky and T-Bone as they explore the Garden State while running a hilarious campaign for Class President.

Join them as their adventures continue and then visit their newest project, Government In Action. 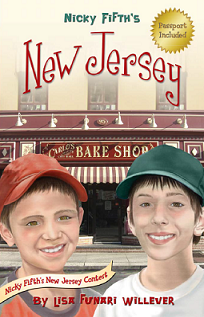 While waiting to hear they’ve been promoted to New Jersey’s Official Junior Ambassadors, Nicky Fifth and T-Bone plan another round of hilarious Garden State Adventures. T-Bone becomes unglued when he reads a letter from Tessy Colegrove, suggesting they visit Carlo’s Bake Shop in Hoboken, site of his favorite show, Cake Boss, and …her family’s bakery. This could be an unforgettable day trip unless a star struck T-Bone forgets how to speak.

Follow Nicky and T-Bone’s itinerary and have your passport stamped along the way. Look for the Nicky Fifth logo!

Buy Now – Temporarily out of stock 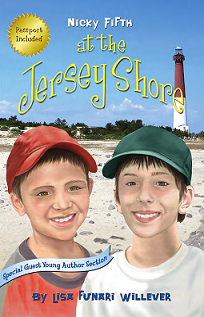 Nicky Fifth at the Jersey Shore

Fifth and T-Bone are on the verge of becoming New Jersey’s Official Junior Ambassadors and their next adventure is 127 mile Jersey Shore. From Cape May to Sandy Hook and along the Raritan Bay, Nicky and T-Bone explore the REAL Jersey shore, from amazing beaches to lively boardwalks and the diverse towns in between. Think you know New Jersey? Explore the Shore and See!

Follow Nicky and T-Bone’s itinerary and have your passport stamped along the way. Look for the Nicky Fifth logo! 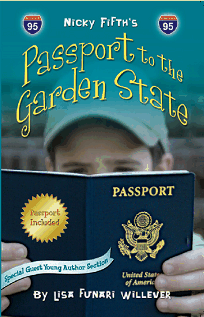 The Nicky Fifth series seamlessly combines fiction and non-fiction, humor and education and now, for the first time, a Passport! Read the book and follow Nicky and T-Bone’s adventures and have your passport stamped at 36 special Stamp Stops along the way.

NEW! Follow Nicky and T-Bone’s itinerary and have your Passport Stamped along the way. Look for the Nicky Fifth logo!

When the Governor of New Jersey invites Nicky Fifth and T-Bone to serve as Unofficial Junior Ambassadors, how can they say no; especially, when no other Governors have called. They accept the job and find the best New Jersey places to share with other kids. From the State House to Wild West City to Lucy the Elephant, get ready for another… Garden State Adventure! 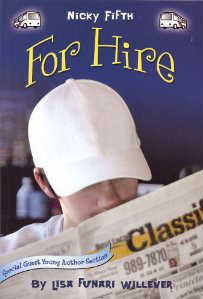 The Nicky Fifth series has been adopted by schools throughout New Jersey as the cornerstone of their New Jersey curriculum!

In Nicky Fifth For Hire, Nicky and his sidekick, T-Bone, set out to find jobs and eventually start their own Odd-Job Business. While waiting for the odd jobs to roll in, T-Bone devises a way for Nicky to earn money to buy his parents an anniversary gift. Does Nicky really want to know his idea? 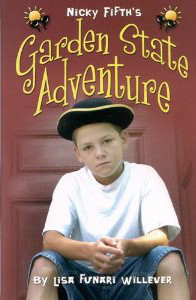 Every story has a setting…why not use real places and information in the story?

In Garden State Adventure, as Nicky adjusts to living in the Garden State, he decides that the family needs a trip to Disney World. Much to his dismay, money limits their options and his parents invent a vacation of New Jersey daytrips.

In 32 Dandelion Court, Nicky Fifth learns that, despite his protests, his family is moving to New Jersey. Thanks to his not-so-well-informed friends, he expects to spend his first summer collecting tolls and pumping gas.

Selected as a favorite by First Lady Laura Bush and displayed at the White House and named a Fall Favorite by Learning Magazine, Chumpkin is a story that children love to hear over and over. Convinced that no one will want a pumpkin that grows bigger everyday, Chumpkin is sure he’ll be the last pumpkin in the patch. Wishing he was never planted and looking for a fat-free pumpkin diet, he accepts his lonely fate. Until…(now you didn’t really think we’d tell you the ending, did you?) Breathtaking illustrations, humor and rhyme make this a wonderful read-aloud book.

If only they would put me on a fat-free pumpkin diet, I’d finally hear those magic words, “Hey, Mister, can I buy it?”

There’s A Kid Under My Bed

All monsters know there’s no such thing as kids! Marshall Monster comes from the typical monster family complete with the typical older monster brother, Fred. While monster parents always tell their little monsters that there is no such thing as children, Fred convinces Marshall that a sticky, scary kid is hiding under his bed. As the night winds howl and the moon casts long shadows, Marshall begins to believe that kids are real and that he is about to become a squishy Marshall-monster treat.2009 Benjamin Franklin Award Finalist

“A little monster scaredy-cat,” teased his brother, Fred. “Maybe there’s a scary kid underneath your bed!” “Don’t scare your little brother,” mother monster, she declared. “There’s no such thing as kids, so there’s no reason to be scared.”

One disgruntled chicken and one major holiday equals a refreshingly funny tale and begs the question… Can a chicken really replace the Easter Bunny? Captivating illustrations help tell this delightfully humorous, rhyming story showing how even the most unlikely characters can work together.

“His days they are numbered and this much I know… It’s time for a chicken, THE BUNNY MUST GO!”

You Can’t Walk A Fish

Matthew McFarland is back from his Sunday rides and he has one thing on his mind…talking his parents into getting a dog. But dog-sitting for the Johnson’s puppy has taught Matthew a very valuable lesson… be careful what you wish for, you just might get it!

Everybody Moos At Cows

Featured on the Rosie O’Donnell Show and based upon the old Sunday Family Ride, this story reminds us why we pile into the car and hit the open road. Full of mayhem and mishaps, its a fun-filled story that everyone of all ages will enjoy and features on of Funari-Willever’s most memorable characters, Matthew McFarland.

So now I’ll make my final plea, “Can you take the ride, but not take me?” Of course the answer’s always, “No! It’s family time and you must go!”

A Glove of Their Own

This story is for and about kids who once played or still play baseball for the love of the game, without coaches and concession stands and with little worn-out equipment. It is reminiscent of simpler times when kids met at a neighborhood field or an empty lot and just started playing. It is also about generosity and kindness as children see the playing the game forward concept in action. This book is part of a much larger movement to raise awareness, funds, and equipment for children who would otherwise go without.

“The next guy struck out, so the few mitts we shared were tossed from the home team and caught in mid-air. I ran out to short stop, got into the zone and hoped one day I’d have a glove of my own.”

Where Do Snowmen Go? – Currently Out of Stock

We build them, we love them, but does anyone really know where they go when the air begins to warm up and winter starts to fade? This story will warm your heart and leave you smiling. Retro-style artwork by the talented Chris Gash compliments the humorous rhymes.

“We knew that spring was coming quick, the air was not too chilly. We wished that we could drive him north, but that would just be silly.”

TEMPORARILY OUT OF PRINT

Maximilian The Great – Currently Out of Stock

Meet baker-turned-magician, Maximilian, and get ready for some magic…but not the kind of magic you may have expected. Max’s show is full of mixed-up magic and silly spells and by the end of his show he learns the true meaning of magic. Told by Tah-dah, the keenly observant rabbit-in-the-hat!

“Next,” Max declared, “I will pull out a puppy.” But a fishbowl appeared with one tiny guppy. He was scared, he was nervous, he just could not think. He reached for a sandwich, but pulled out a drink.

TEMPORARILY OUT OF PRINT

On Your Mark, Get Set, Teach

The Must Have Guide For New Teachers and Student Teachers Preparation is the key to a successful teaching career and veteran teachers Lisa Battinelli and Lisa Funari Willever have created the ultimate guide for new and student teachers. Written in a conversational tone, the authors share methods, tips, and techniques as well as heartwarming and humorous personal experiences.

Question – Where Do You Find 2 Million New Teachers With Experience?
Answer – You Don’t

With more than 1 million teachers nearing retirement and the demand for teachers increasing, the future of students goes beyond hiring qualified teachers. According to NEA statistics, 20% of all new teachers leave within three years and 50% of urban teachers flee the profession after five years. Keeping qualified teachers has never been more important and a great first year is the key.

New teachers are the most neglected population in the school community and On Your Mark, Get Set, Teach takes the personal, rather than scholarly approach to prepare teachers for a lifetime in education.

51 Secrets of Motherhood (That Your Mother Never Told You)

51 Secrets of Motherhood – That Your Mother Never Told You is the absolute must-have book for moms-to-be. Filled with secrets that help today’s expectant mothers re-tool their mind, body, and spirit for the experience of a lifetime.

Author, Rebecca Matthias – President of Mothers Work, Inc. has immersed herself in the world of maternity for over 23 years, dressing over 25 million moms-to-be via Motherhood Maternity, Mimi Maternity, and A Pea In The Pod. She has taken her experience and everything she has learned from her customers and created this treasure. Written in a conversational tone with captivating photos, 51 Secrets…is just the right amount of information.